As of tomorrow,  it’ll be one week till our 75th Anniversary fly-in and airshow.  This weekend is the big Arctic Thunder show in Anchorage.  If you are coming off of that big event,  ours will be a bit of a let-down…

The Alaska Warbird Museum is still a LONG way away from being a real museum,  but we couldn’t let this anniversary pass without marking it in some way.  As excited as I have been about this,  my goals are pretty modest now.  I’ll have the hangar bay swept and I’m still hoping to have flushing toilets by the 5th.  That’s about all I can hope for right now.

I’m exhausted from all the efforts to organize this thing,  get all the food ordered,  finding out we forgot a few things and praying Amazon can deliver before Friday…  and still do construction,  run the fly shop and fuel planes.

We had a bit of a trial run last Tuesday,  when the Silver Seas small cruise line stopped in Yakutat for a couple hours.  The Hangar was one of the stops for their tour and I had 60 people in the first group,  40 in the second.  They had 25 minutes here,  so I rattled through my speech about N91314 and her history,  Alaska’s role in WWII and then lead them toward one of the unfinished rooms (but clean and dry),  where we set up some of our artifact collection. 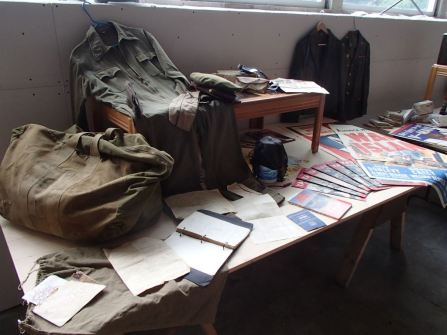 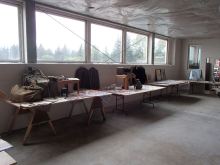 I was pinned down in the hangar bay through the entire visit answering really good questions and hearing about the war from the British perspective.  Nearly everyone aboard was from England and most didn’t realize Alaska was threatened,  or even involved in the war.  Someone really needs to build a museum that talks about this!

With the smaller second group,  I was able to finally slip into the artifacts room and share a little about our collection.  Specifically the Disney animation and insignia collection…  The Alaska Defense Command patch was a Disney design,  as well as the 406th Bombardment Squadron that was stationed in Yakutat throughout the war.

From our collection – Brave Little Tailor 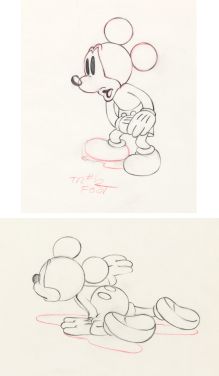 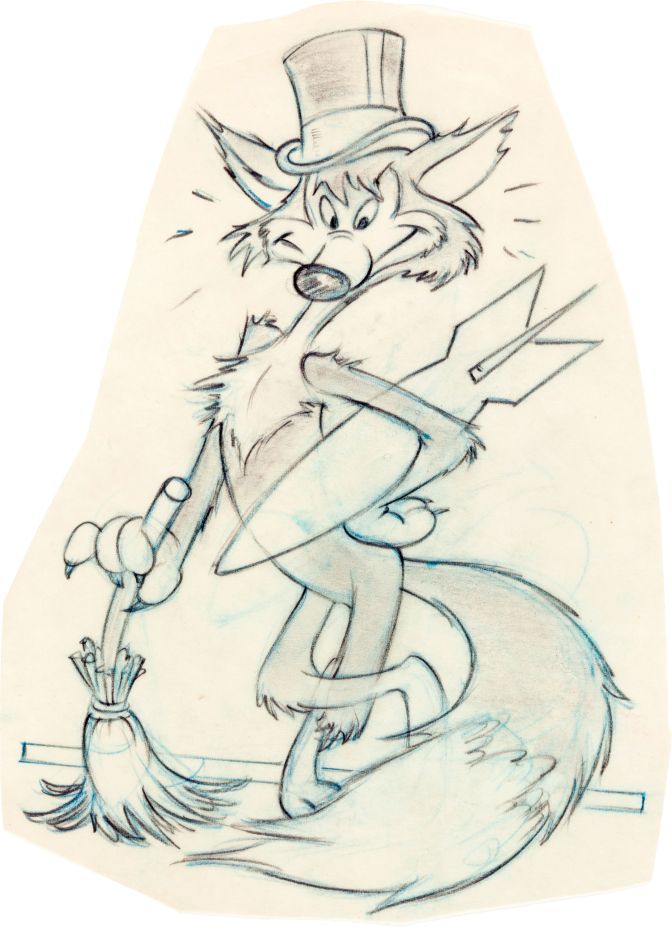 From the Collection – Disney preliminary design for Bomber Nose-art

The city dropped off two port-o-potties today,  so we at least have those.  We have joked about making this a real WWII experience and just dig straddle trenches behind the hangar,  but my wife nixed that idea.  I’m still excited about the event,  but also a little terrified.  Come early and help set-up!

75 years ago, war came to Alaska and Yakutat was at the leading edge of our defense of the territory.  The first Army Air Base completed in Alaska,  Yakutat for a time had the longest runway on the west coast and became the model for other early air bases throughout Alaska.

2016 holds many 75th anniversaries to major WWII events,  most notably for the country is December 7th,  when Imperial Japan attacked the Navy Base at Pearl Harbor.  In Alaska,  they knew what was coming and began a massive build-up to defend the territory from what was to come.  Oddly,  some of the self-made obstacles toward Alaska’s defense became a tremendous advantage. 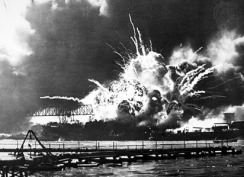 In early ‘42, there was really nothing the US could do to slow the Japanese advance throughout the Pacific.  Our best effort turned out to be a strategic failure called the Doolittle Raid.  Lead by Jimmy Doolittle,  we launched a handful of twin-engine land bombers off the deck of the carrier Hornet.  These aircraft were being ferried to China for them to use,  however all but two ran out of fuel and crashed.  On their way by Tokyo,  they dropped a handful of bombs that did little damage.  In other words,  the mission was a complete failure – except for that it had done to the Japanese psyche.  They had told their people they were invincible – that no one could touch them.  Yet,  here comes a collection of land bombers.

The only information the Japanese could glean from the Doolittle Raid was that Jimmy Doolittle grew up in Nome. This little factoid had absolutely no bearing on the raid,  but it fed into Japan’s obsession with Alaska.  As the Battle of Midway approached,  Japan had twice the carriers available,  along with the more experienced piltos and technologically advanced aircraft.  They divided their forces and sent two of those carriers to the Aleutians,  giving us an even fight.  In other words,  because of their obsession with Alaska,  we had 3 carriers and one island to their four carriers,  found their fleet first and sank all four of their carriers at Midway,  allowing the US more time to rebuild our devastated fleet and train our men.

Up here in Alaska, we were at war with Japan,  but a war had been raging for years (or a century) between the US Army and US Navy.  They didn’t share information,  they fought over funding and jurisdictional control,  etc.  Since the President was a Navy man,  the Navy usually won these battles.  General Buckner,  commander of the Army in Alaska was told not to set foot in the Aleutians because islands are ships and therefore the jurisdiction of the Navy. 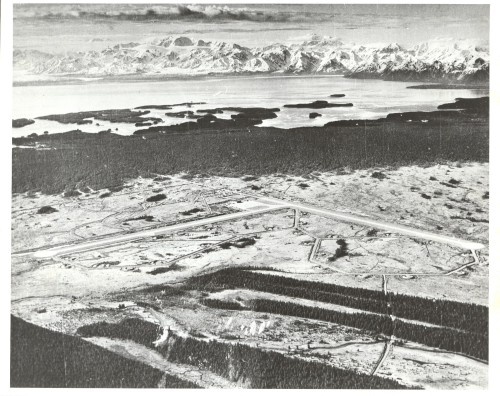 Yakutat Air Base circa winter 1947

Initially in 1940, Buckner was given authorization and money to build three projects in Alaska.  Yakutat,  Annette Island and the Cold-weather Research Station in Fairbanks.  The Yakutat Air Base was supposed to have three runways and we only have two.  General Buckner secretly embezzled money from his three projects,  put it into a private bank account,  set up a private for-profit corporation and set out to build two “canneries” in the Aleutians.  When these “canneries” were done,  we had two new air bases.  Air bases so “secret” that the Japanese spy network didn’t have a clue because even the US didn’t know we had them! 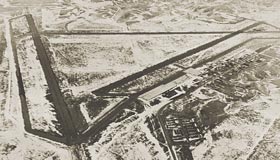 When the Japanese struck Unalaska and the Navy Base at Dutch Harbor, they had three times as many men to land as the US had to defend the entire territory.  Suddenly,  they were hit by a P-40 fighter response so much stronger than they expected that they decided to withdraw and land their people on Attu and Kiska – a thousand miles away.  Yakutat’s third runway on Umnak and Cold Bay saved Alaska from that eminent invasion.  Had these bases been financed in the open,  Japan would undoubtedly have been prepared and Alaska’s role in the war could have been far different.

Although the first bomber landed at the new air base on May 8th (that is our official “establishment date”),  the formal grand opening ceremony took place August 6th,  1941.  This year,  Fairweather Day falls on that date,  so we moved our official Grand Opening Anniversary celebration to Friday August 5th,  2016.  We are celebrating with a state-wide fly-in and air show,  complete with aircraft from the National Guard and possibly the Canadian Air Force.  There will be WWII aircraft from up in Anchorage that weather permitting will give rides for a fee.  The event will close with a 6pm hangar banquet dinner (for a $30 donation PP) and speeches from General Hummel and Lt. Governor Mallott.

This will be a busy weekend, with the new Sandy Beach Park dedication Friday at noon,  our events begin an hour later at 1pm with a paper airplane contest (we’re going for distance across the hangar bay floor when launched from the 2nd floor balcony),  short-field landing contest at 2pm and flour drop (the pilot flies over the target and tries to drop his baggy of flour as close to the mark as possible out the window) at 4pm.  Aircraft static displays will be on the ramp for visitors to explore.  Yes,  we need volunteers to help with logistics,  airport security and set-up.  Contact me at the fly shop if you want to lend a hand. 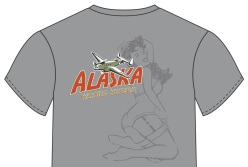 OK, here is my disclaimer…  We are obviously still a long way from being the museum we hope to become.  We just couldn’t let this particular 75th anniversary pass by without marking it in some way.  My grand hope right now is just to have a few toilets that flush and the hangar bay relatively clean for the event.  If it rains,  we’ll probably have no one from outside Yakutat show up,  but a beautiful day could bring in dozens – if not hundreds of aircraft from around the state.  As our first event,  our learning curve has been steep,  but we’ll get better over the years as we have more and more air shows under our belt.  Ultimately,  this event is about honoring those who serve our country,  not just the Greatest Generation,  but all the vets and active servicemen and women who protect our freedom.  Freedom doesn’t come from the promises of politicians,  or the words on old dusty documents.  It comes from the people who stand with their bodies as our shields,  to protect us from those who wish us harm.